List of Entrance Exams for MS in Germany Study 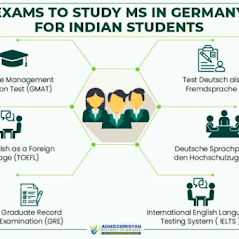 List of Entrance Exams for MS in Germany Study

What are the different entrance exams for pursuing higher study in Germany, is definitely a question in someone’s mind who is applying for study in Germany. Let’s begin with the phrase -“Traveling makes you rich, but Travelling for education makes you wealthy.”

List of Entrance Exams Required for Studying in German Universities:

The entrance tests required for Indian students to study in Germany mainly depend on the Masters programs and the Universities one chooses. Universities prefer Language tests based on the language requirement of that particular university. So make sure to prepare for the language test, which is widely accepted and fits your need.

If you are planning to study at any German University where communication is not English, you need to pass one of the two German Language proficiency Tests; TestDAF or DSH, recognized by all German universities and institutions. Indian students who want to study at German universities taught in the English language must not take these exams.

TestDaf stands for Test Deutsch alas Fremdsprache which means Test of German as a Foreign Language. It is an internationally recognized German language proficiency test.

The TestDaF assesses the four language skills separately (Listening, Reading Comprehension, Written, Oral). It is currently being offered six times a year in around 450 test centers in 9690 countries worldwide.

Goethe-Institut / Max Mueller Bhavan offers the TestDaF exam with five test centers across Bangalore, New Delhi, Pune, Coimbatore, and Chennai in India. You will receive a certificate within five to six weeks.

DSH is another German proficiency exam. The DSH examination pattern bit similar to TestDaF as well. It consists of a written and an oral examination. The test results will be graded into three levels as follows DSH-1, DSH-2, and DSH-3.

DSH exam has no test centers across the world, except in Germany. For more information, we suggest you get in touch with German-language experts.

Proficiency in English is a must to get admission for a Master’s course in Germany. TOEFL and IELTS are two widely accepted English language tests all around the world.

TOEFL (Test of English as a Foreign Language) is a standardized test conducted by ETS; this test measures non-native English speakers’ English proficiency to enroll in English-speaking universities. TOEFL score is accepted by more than 10,000 universities around the world.

Graduate Record Examination is accepted at many graduate and business schools in Germany. This entrance exam is required to enter various higher education institutions, especially if you wish to pursue engineering. Various universities in Germany accept GRE scores as a prerequisite for admission.

Many business and management institutes in Germany prefer Graduate Management Admission Test. The test consists of four sections analytical writing assessment, integrated reasoning, quantitative reasoning, and verbal reasoning. GMAT is an aptitude test that tests students’ aptitude, especially those who want to do a Management course in Germany. Every year thousands of students take this test to be eligible for various management courses.

Above mentioned tests are one of the entry requirements to get admission to German Universities. For further information, please feel free to contact Admissiongyan. As an experienced overseas education consultancy, we can help you with the right support and guidance to study abroad.